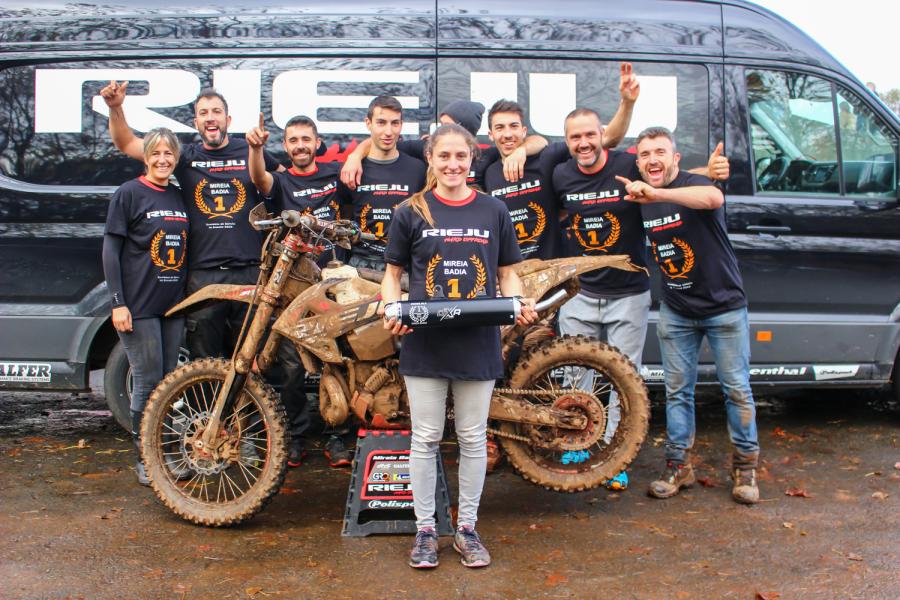 With the Enduro de Santiago de Compostela, the fifth and final round of the Spanish Enduro Championship 2022, the Rieju Team finishes celebrating a new title this season thanks to the victory of Mireia Badia in the women's category.

This last round in Galicia was very important, as the points had to be multiplied by three, which made it even more exciting, especially for the riders who had their sights set on the final classification of the championship. In addition, the participants found that during the days of competition, the rain fell relentlessly, leaving a very muddy and slippery terrain.

Mireia Badia completed a spectacular season, after winning a month ago in the EnduroGP of Germany the title of runner-up in the Women's World Championship, now in Santiago de Compostela and under very difficult conditions, in the first day she added a new victory that already served her to achieve the title of Champion of Spain 2022 in Women, with one day left to finish the championship.

Once again on Sunday Mireia received loud applause at the end of the race, once again demonstrating her professionalism by taking a second victory in Santiago. The Rieju rider closes a spectacular season in which she has won all the races of the Spanish Championship 2022 at the controls of her Rieju MR.

His teammates, Pau Tomás, competing in the Enduro-1 class, finished fourth on Saturday and sixth on Sunday, finishing sixth in his category.

For his part, Víctor Guerrero finished fourth in the Enduro-3 class on the first day, while on Sunday, despite battling for third position, he suffered a technical problem, which left him out of the race. In this way, Víctor concludes the season in fourth place in Enduro-3.

Mireia Badia:
"I had a complicated weekend due to very difficult race conditions, with the rain falling and broken chronos, with deep undermines, roots, etc., so it was difficult to go fast, despite this I end up happy, because despite the complications, the times I set were good. I finished the year winning all the races of the championship, so I am very happy to get a new title. I would like to thank everyone in the Rieju team for their hard work throughout the season".

Víctor Guerrero:
"In Santiago de Compostela we had a quite hard and demanding race, with technical lap times and due to the rain, it was quite complicated, despite this we had a good time. For me the race went well. On Friday in the Super Test I had a crash in a rocky area. On Saturday, in the first special stage, the chain came off and I lost a lot of time, but I was able to recover and finish in fourth position. On Sunday I was doing better, I was getting good times and I was in third place provisionally, but when I reached the second lap, in the Cross Test, I had a technical problem that I could not solve and I was forced to abandon. We are leaving this race with a bad taste, but even so, in the end we finished in fourth place in the championship. I want to thank the team, who as always have been great, and all the sponsors".