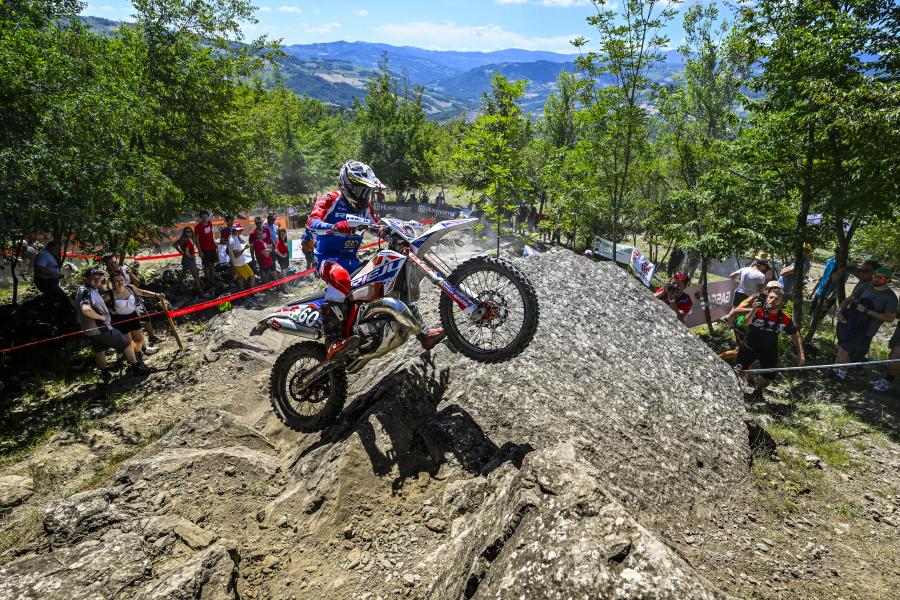 The third round of the FIM EnduroGP World Championship took place in Carpineti (Italy). The Rieju Team representatives on this occasion were Pau Tomás and Jan Olivera, taking into account that Víctor Guerrero is injured and could not attend, while Mireia Badia did not compete either as it was not a race that counted towards the Women's category.

Highlight the high temperatures and the dryness of the terrain, with a lot of dust, which marked an Italian GP with speed and important special slopes that were very demanding for the pilots.

Due to the high level of the participants, the E-1 class continues to be one of the most difficult categories in the World Championship, with riders who are very fast and in which Pau Tomás is competing with the MR 300 2T. In this GP he is using for the first time the new MR Six Days France. On Saturday Pau finished the hard day in the thirteenth position, while on Sunday, despite the terrain being quite punished by the passage of the riders, he managed to improve his overall times to finish near the top ten, in eleventh place.

His teammate Jan Olivera, continues to stand out in the Open 2T class, where he managed to finish fourth on the first day, while on Sunday he improved his times to beat two of his rivals and finish on the podium in a magnificent second position in the class.

Pau Tomás (E-1): "Good weekend in the Italian GP, with very fast and hard special stages where it was difficult to find the right pace, but I'm happy with the progression I had during the race, on Saturday I finished 13th in the E-1 class; improving on Sunday by dropping two positions and finishing 11th. But the best thing was to reduce the times in the specials and set good times, so I'm very happy with the bike and my riding. I want to thank all the work done by the team members".

Jan Olivera (Open 2T): "Saturday was a very hard day, I had to work hard to battle at the front of the race, with a lot of effort and a positive attitude I managed to climb up positions to finish fourth, just missing the podium. On the second day, with a better knowledge of the race, I was able to improve my performance, lowering my times and overtaking some of my rivals, to finally get on the podium in second place".

The EnduroGP World Championship does not rest because next weekend the fourth round will be held in Coimbra, Portugal. This double round will be scored for the women's category, so we will enjoy another GP with the presence of Mireia Badia.